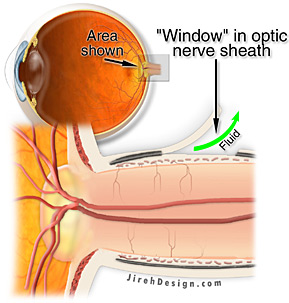 The eye meridian is the optical eye nerve, as seen at the back of the eye in the image that can carry a passing of energy and images to the brain, as ya can see from the optic nerve image, its because of the nerve connections at the back of the eye. If the optic nerve can pass energy and the images energy, then it too can pass thought up energy such as mystical energy. Where its passing energy, including the thought up energy, to the eye from the brain and through the nerve itself and back again as with any nerve. So if the optical eye can do this, the optic nerve is called an eye meridian, too, as if it can pass normal nervous energy, it can pass the magical or mystical energy as well.

There is a possibility to do a storage of the thought up energy and mystical energy as you pass energy into an organ, but the longer the thought up energy stays there, the more of a chance that it can cause blindness and it doesn't have to leave there. As the energy stays there to remain quiessant and silent, until its thought to do things. It is possible to discharge energy from the eyes if only to another person, thing, or place with the eye meridian and instinctive thought energy build up. In a process called photogenesis. Or, the light passage of energy to other mediums from somewhere. So there we have it, through the eye meridians you can pass energy thats possible and also mystical. As well as store it and have it pass energy from the eye to elsewhere. The mystical energy can counter the blindness it may cause, as by being thought charged to cause the eyes to see again. And to also see clearer.